For The Greater Gouache.

Just a quick entry to show the finished gouache painting. I enjoyed painting with them so much that I am gonna start another one right now. When I was taking an oil painting class at the Watts Atelier, I asked the instructor (Jeffery Watts) about the best way to get comfortable with oil painting. He explained that starting with gouache is a great intro into oils because they tend to behave in the same ways in terms of opacity, vibrance and coverage. Except with gouache you don't have to worry about drying time as you do with oils, and the gouache reactivates the second you hit it with water - making coming back to a painting really easy. And no fumes. :)

I used a lot of the principles of oils when approaching my first gouache painting so I sorta did the reverse of what my instructor told me. But hey, many of the techniques are interchangeable (for the most part). I liked the results so much and it was such a delight to paint with that there will be many more gouache paintings in the future.

Off to start the next one! 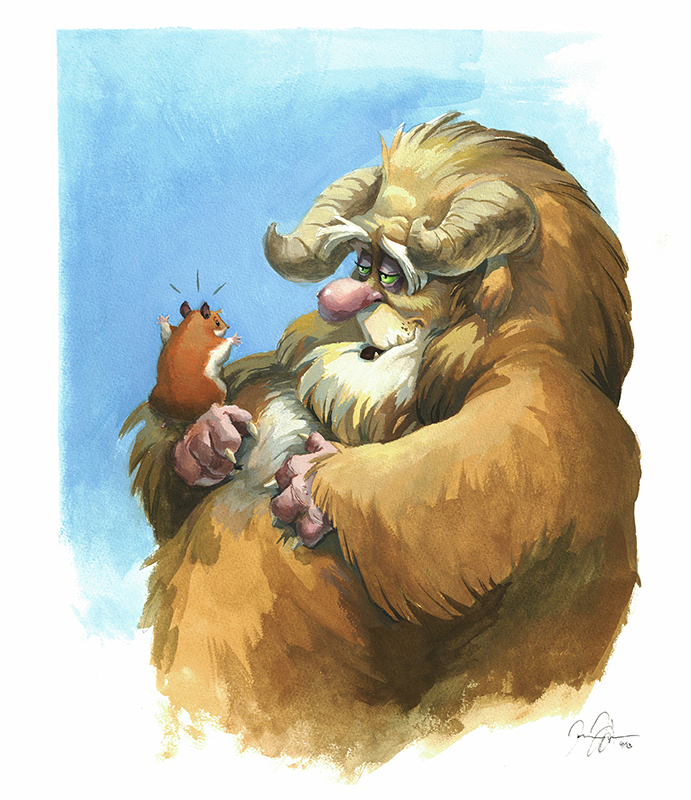 Posted by Unknown at 5:56 PM No comments:

It's been a little while... well, more than a little while since my last entry and there have been a few new sketchbook entries and paintings done. I signed up for the SCBWI conference in LA in August and am also entering in to the sketchbook showcase. To prepare for this I have been working on getting some new pieces done. This will allow me to further complete my dummy book and also serve as portfolio pieces. 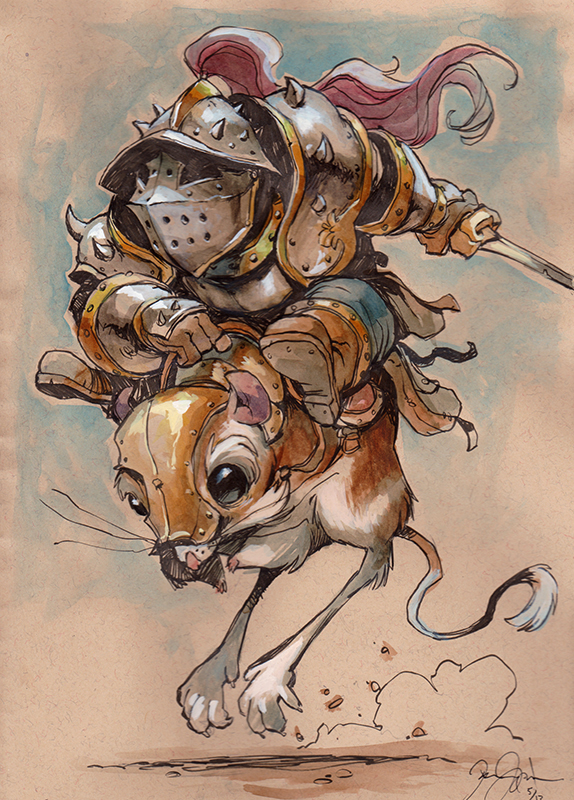 With my last sketchbook I did a lot more color work with watercolors and gouache accents. I really enjoyed painting in watercolor... I always have. I was really comfortable with it in high school but watercolor gave way to charcoal, pencil and ink as I focused more on character design and figure drawing and less (by less I mean none) illustration. During this ink and pencil phase I created a series of characters called The Critter Riders. So I decided to revisit the series in color and ink, starting with one that I did before but wasn't too happy with - the Kangaroo Rat Rider. The new one turned out much more dynamic and I was so happy with it that I am going to revisit more of them. I closed out this sketchbook with this painting... better to end on a good note. 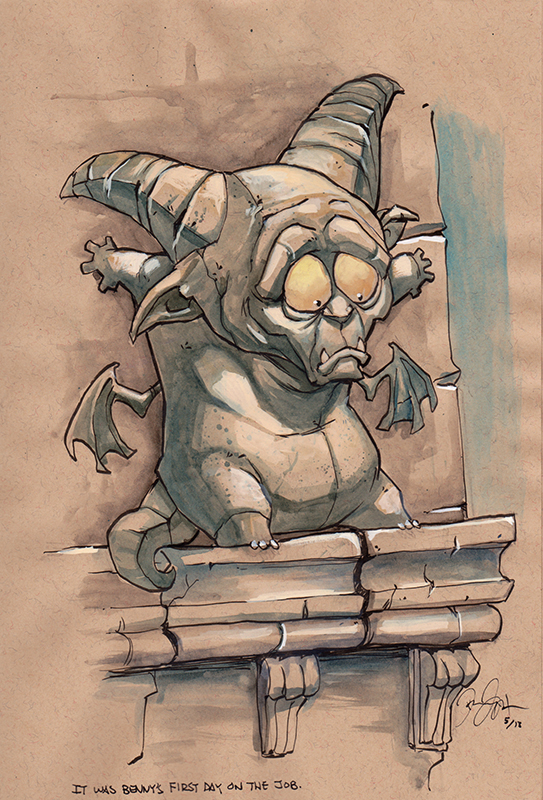 Starting off the new sketchbook was a little rough... it usually is (for me, anyway). This next painting isn't the first page of the new sketchbook unfortunately... it took a few failed attempts at a revisit of one of my favorite Critter Riders before I moved on to something else. I dunno, maybe this little guy's predicament reflects my own anxiety with the new sketchbook... The caption: "It was Benny's first day on the job..." A timid gargoyle steps out to take his place among his friends as building guardian. This was more a warm-up sketch and painting but who knows, maybe we'll be seeing more of Benny and his gargoyle friends... 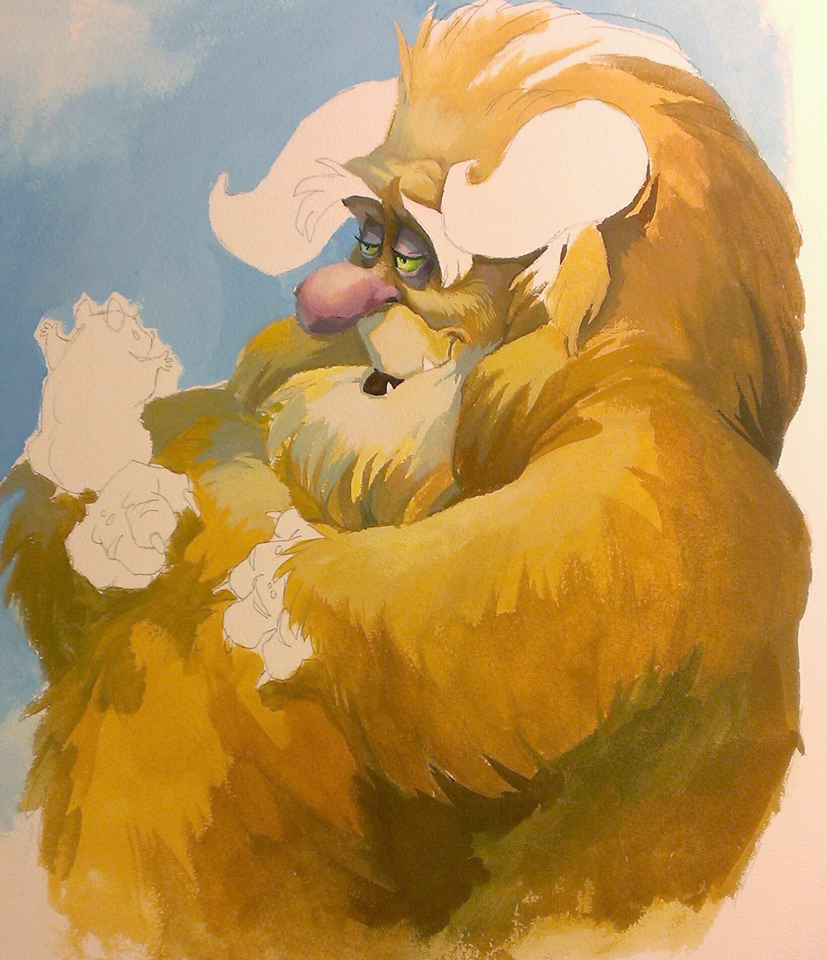 Continuing the portfolio illustrations is my first full gouache painting of a ink drawing I did in my sketchbook. It's of a gentle giant of a monster patiently listening to his little hamster friend complain about whatever hamsters complain about... I dunno, maybe being stuck in his cage all day... anyway, I always sorta liked gouache but never gave it a chance. I was told that gouache is much like painting in oils so, I took what I learned in the oil painting classes I took over the past couple years and dived into my gouaches. Laying out a palette similar to the oil palette I was comfortable with, I started my painting.

The first attempt was a disaster but I'll just call it a warm-up. The first painting was too big and took too much paint to cover the large area of the monster's body. The colors came out too muddy as I have a tendency to over-think my color mixing. So I trashed the first painting and immediately started on the second attempt. This time the drawing would be a bit smaller - only 12"x16" instead of the 16"x20" of the first painting.

It made a huge difference the second time around. I stopped over-thinking my mixing and endeavored to create a more rich looking character. It just clicked and before I knew it I was in a groove! Gouache gets such a bad rap... I say this because so far I really enjoy them. That could change... as could my tune about these paints. So far so good. The above picture is an in progress shot. I will share more as I continue with this piece. Stay tuned!