A few new drawings to post! Ranging from a couple inktober entries to some new monster/hamster ideas.

Things have been fairly busy and there had been some exciting progress on my book endeavor. Can't say anything about it just yet but it's got me very hopeful that it's the start of something big. I also started a class at Art Center on writing and illustrating children's books. By the end we will have a dummy book and be armed with the knowledge of how to approach publishers with our book ideas. It's been a lot of fun so far and I've learned a lot but, we're only 2 weeks in and have 8 more to go and lots of ground to cover.

I learned so much at the LA SCBWI conference in August but this course will actually produce a dummy book which I am excited about.

On to the drawings!

First up is a vignette inspired by the day Dina and I discovered our little hamster - Jelly. We wandered in to Petsmart with no greater plan than to just look around. When we made our way to the critters section Dina was instantly taken with all the cuteness contained in those glass cages. The hamsters all went about their daily activities seemingly unaware of the people staring in at them. But one little hamster was very interested in our presence. She was putting on a little show like a puppy at the pound, using every adorable device she possessed to get attention. This little hamster seemed genuinely aware of us and we instantly connected with the precocious, little Syrian hamster. She became the inspiration and the hamster I used in my paintings. Dina named her Jelly and she is just about the cutest damned hamster ever.

The next is another revisiting of one of the Critter Riders. Like the previous reworks I wanted to explore them in color and more action. This is the Red Squirrel Rider. So much fun to paint. 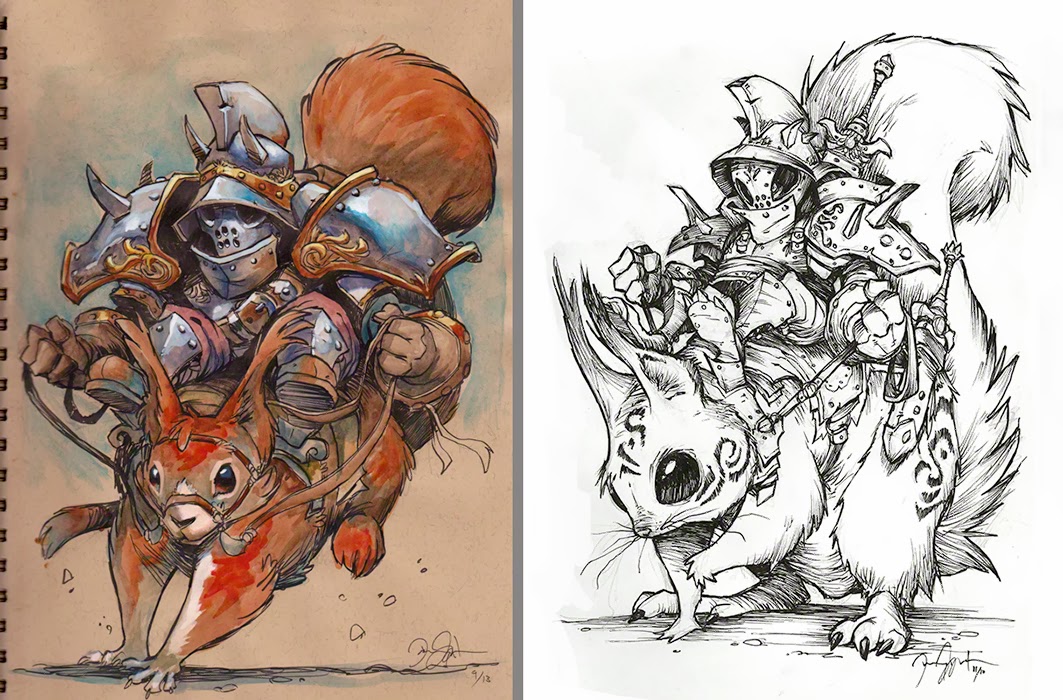 The idea for this sketchbook entry was given to me at Starbuck's before I even sat down to start drawing. Waiting in line to order my hot chocolate, a mother and very small son were ordering ahead of me... I was taken aback when the little boy stepped up to the counter and order some complicated mocha frappacino latte half-whip double scoop disco inferno! It was pretty impressive actually... it's just a sign of the times, I guess... I sheepishly followed up with my mundane order.

I went back to my tiny round table, hot chocolate in hand and figured I would get the last laugh. I titled it "Starting Them Early"
It's not all monsters and hamsters, ya know... as much as I love to draw them I gotta keep myself somewhat prolific. :P I love doing figure drawing and portraits as well but never have much call for them so, when I want to take a break from all the cuteness and to sharpen my more realistic skills, I will knock out a study or two. There is a little social media challenge (so to speak) called Inktober where any artist can participate by doing a traditional media drawing so long as it is finished in ink, post it on instagram, facebook, twitter, etc. with the hashtag "inktober." Many artists take part and there is some amazing work that is done. You can do one a day, one every other day or one a week... whatever you have time for... I decided to use the opportunity to do my inktober entries as more realistic studies of things I love... armor, knights and sculptures. I love doing these so much that I am gonna make it a regular deviation from my usual monster/hamster routine.

And now to bookend this blog entry with monster/hamster cuteness...


Catch ya on the flip side!
:Danny