I guess these are gonna appear out of order now since the newest post shows up on top... that's planning!

Read the entry below before continuing with this post...


Aww hell it doesn't matter what order you read them in...


So yeah! Sketch Dailies are great and a fun way to draw different subjects... But then, for one month out of the year, rising like the Great Pumpkin from the pumpkin patch comes INKTOBER! Started by the talented Jake Parker in 2009 it's a month long free-for-all. The rules (guidelines): an entry for every day of October completed in ink only. This can be brush and ink, ball point pen, marker, Sharpie, Crayola Marker, pen and ink, whatever. This year he did a Sketch Dailies approach with suggested subjects but it wasn't mandatory. You can draw whatever you want. The goal is to have 31 ink drawings by the end and most artists complete the challenge... most, except me. I will next year. October is a busy month for me what with my birthday and all. :)

This October was especially busy for me - freelance, paintings, birthday, excuses, Halloween, brother got married, more excuses, Dina and I got a dog... more on that later.

But I digress - I started into this Inktober throwing some inky punches... then, stuff...
For most of them I went back to a favorite - brush and ink. I focused on armor studies. Be it knights or armor from the Star Wars trilogy. I practiced my proportions, understanding shapes and their relationship to one another as well as value. But mostly I just want to recreate, as accurately as I could, my reference images. I was happiest with Darth Vader and the armored gentleman brandishing a sword. I love armor studies. I typically lean toward drawing organic stuff and shy away from hard surface objects but I'll always make an exception for armor.

I managed to eek out 11 drawings for Inktober 2014. Jake Parker does all 31 days and then sells a book with all his images! That will be a goal for next year. :) Unless my birthday...

The Edward Scissorhands was a combination Sketch Dailies and Inktober... two birds, one stone sorta thing. The Rocketeer and the Shadow I did because I love them. 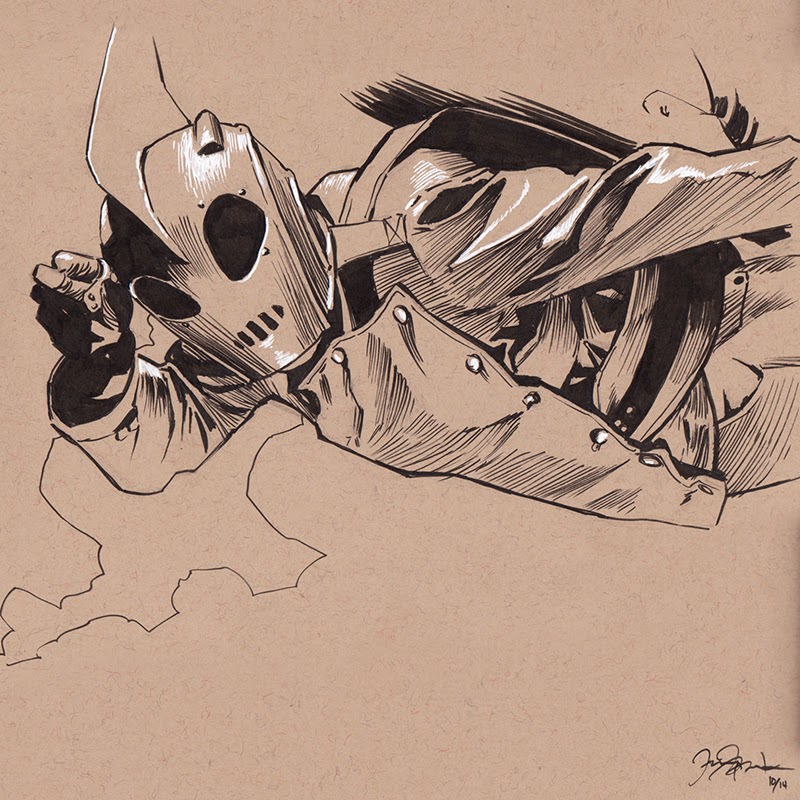 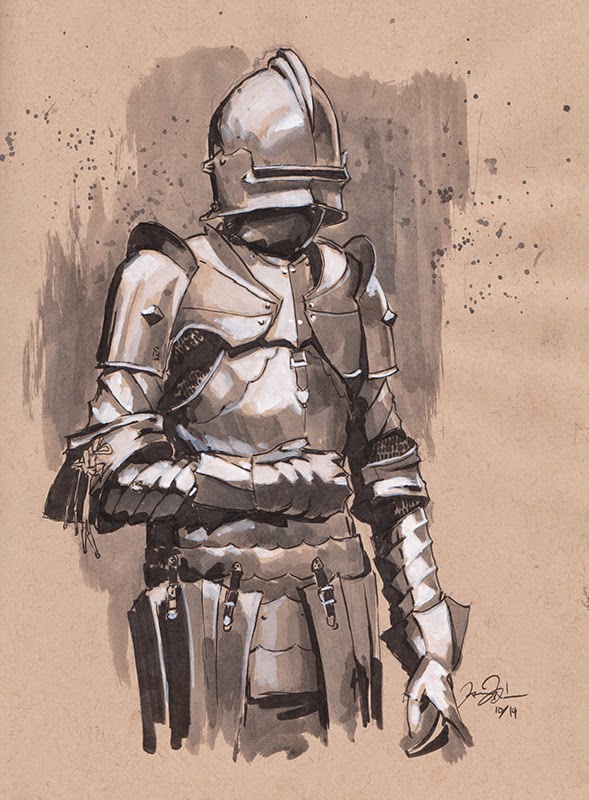 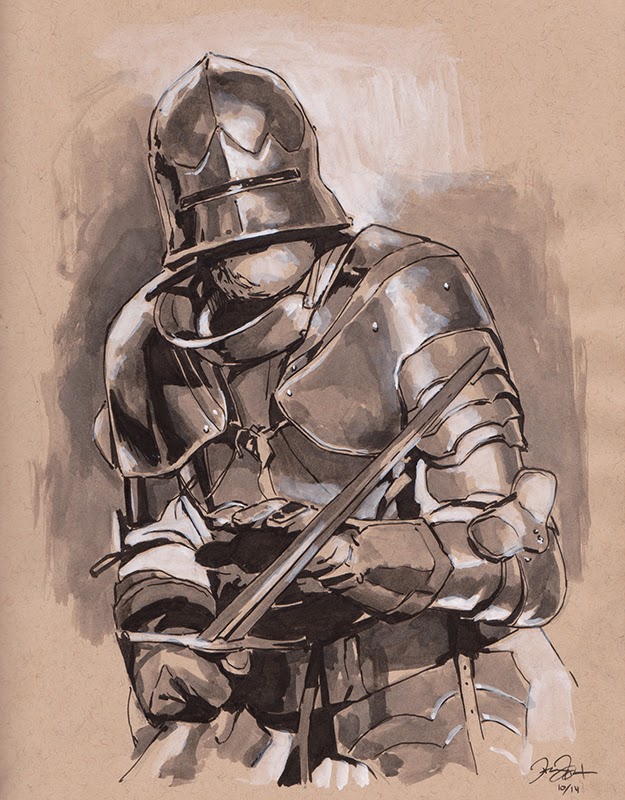 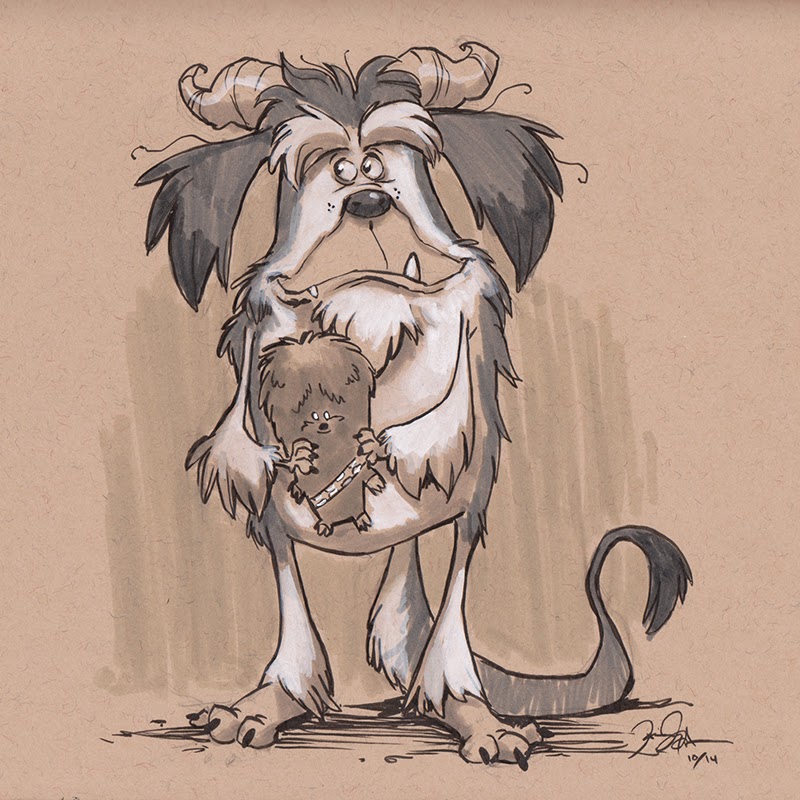 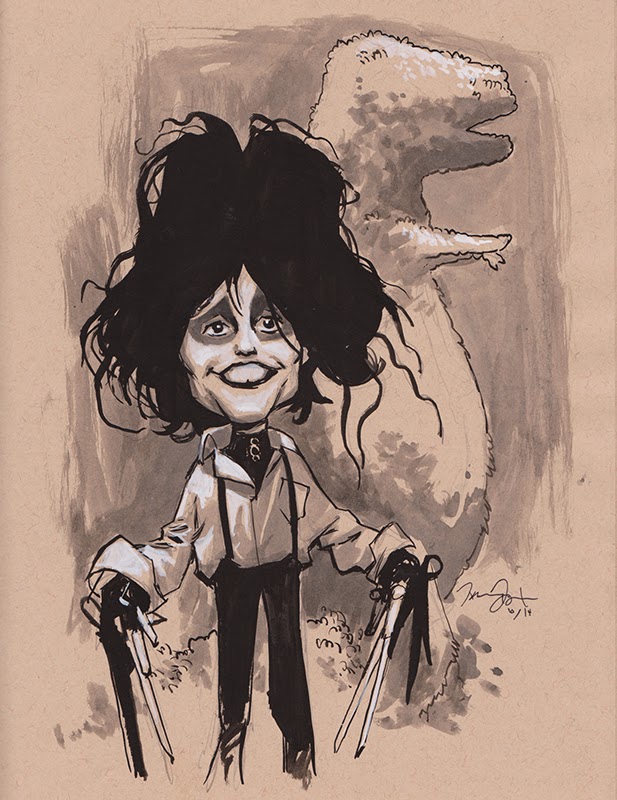 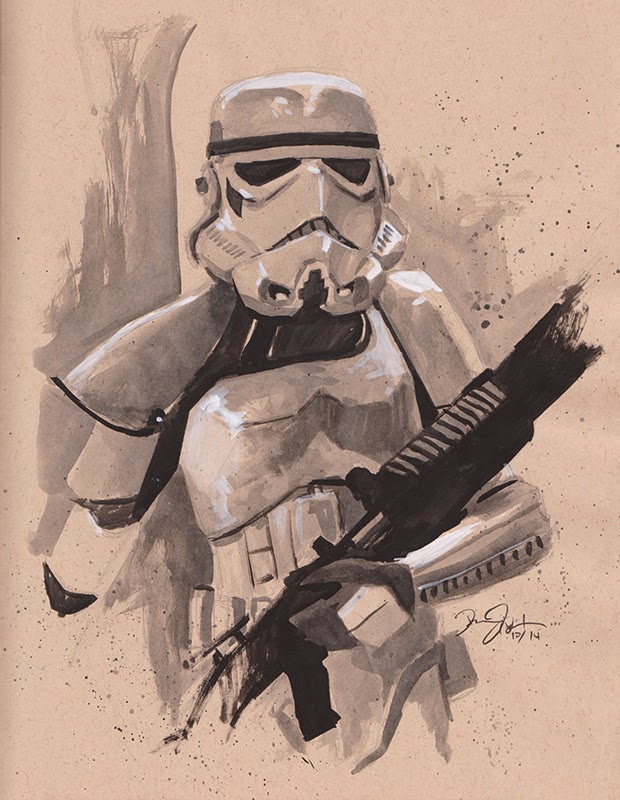 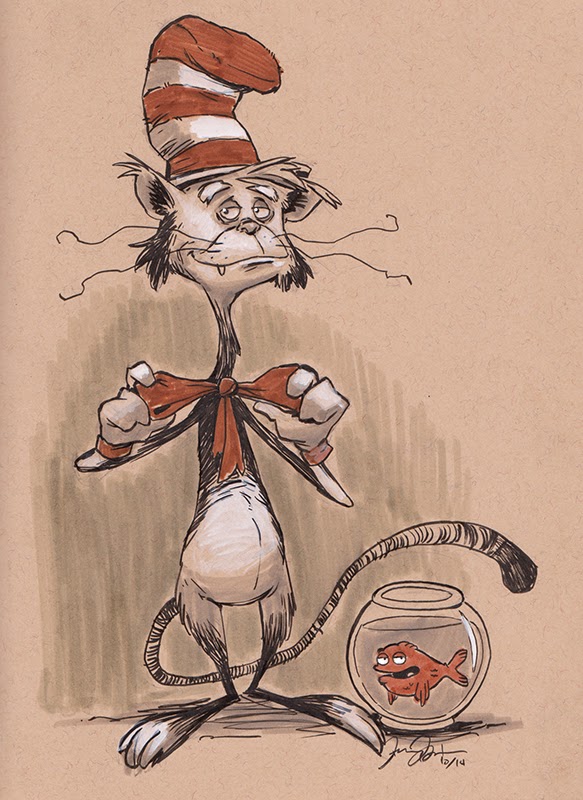 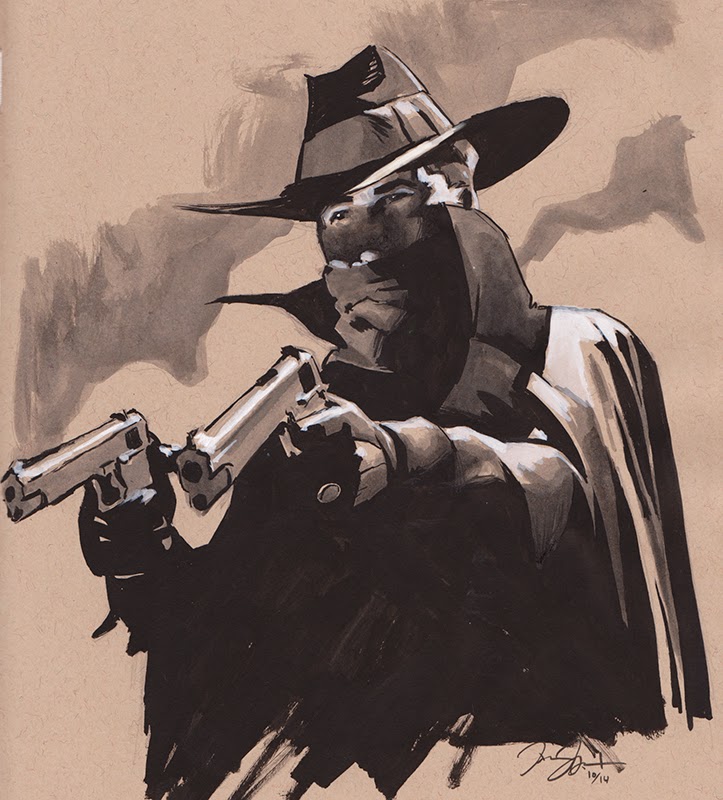 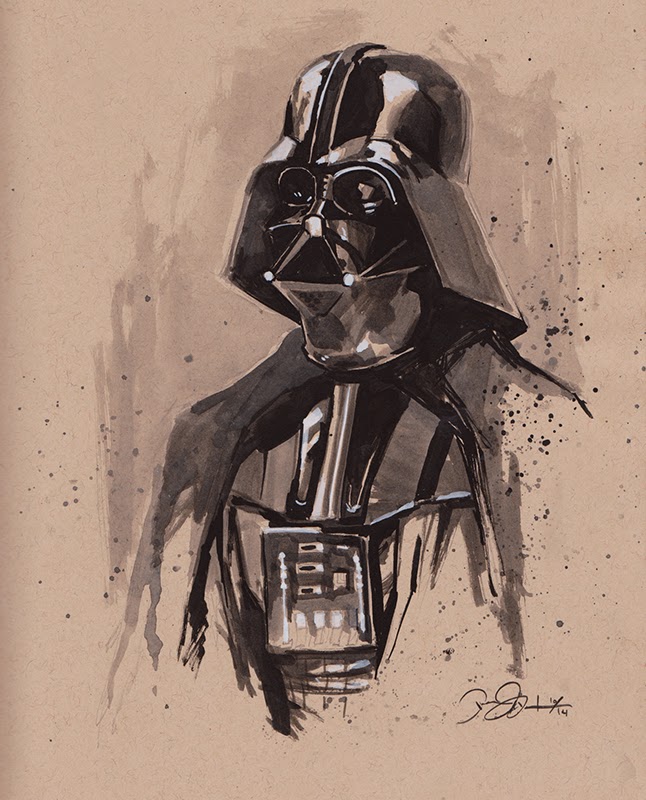 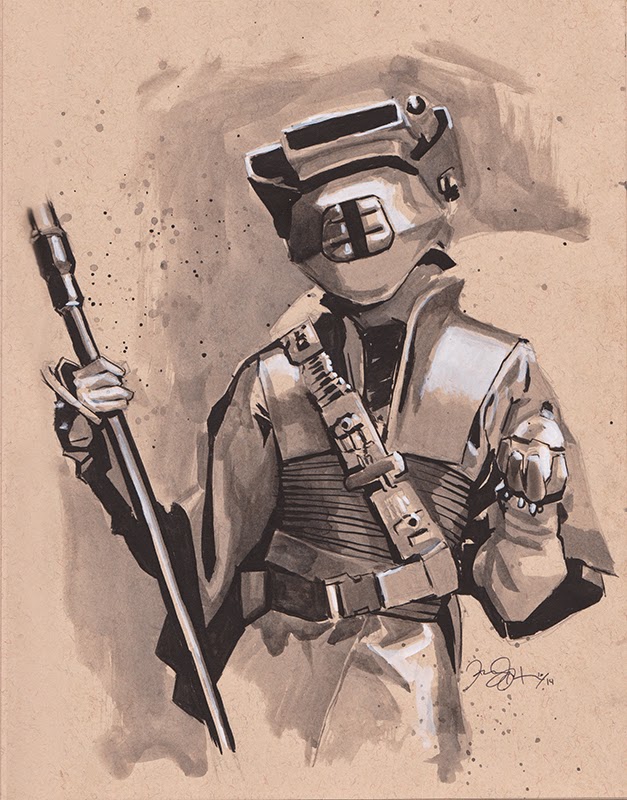 I used acrylic ink which gives really rich, deep blacks. The only trouble is that you have to work fairly quickly and deliberately since the ink has an acrylic component to it it doesn't lend itself to blending or reactivating with more water. It works best being layered thin (light) to thick (dark.)
Brush and ink is an old favorite from my high school days when we used dry transfer lettering and did our color separations on acetate - by hand.

Speaking of getting old - we got a dog! His name is Bhobi and he's a terrier/schnauzer type dog. He was a rescue we found at the Lange Foundation in Los Angeles. We fell in love with the little guy right away. Only a year and 4 months he is still a puppy and requires steady guidance. In the 6 weeks we've had him he's brought just as fun as can be. A genuinely nice dog - he wants to be friends with every dog he meets and any person he meets. He's a perfect match and a wonderful addition to our family. He's got long legs like an AT-AT. He can jump and hop like a pro and he loves to run... LOVES to run. :-\ Bhobi gets compliments on how cute he is wherever he goes - he's a lot like me in that regard. :P HAW! I kid.

He's quickly settled in as a member of the Beck/Dominguez family and we love him to pieces. I mean, just look at that face! It's happening... we're becoming dog parents.

Oh, yeah! Sketch Dailies held a little contest with the creators of the Box Trolls movie. The topic was (obviously) the Box Trolls. The grand prize was a background prop from the movie. 3 grand prize winners were selected and I was one of them! It was quite a pleasant surprise and I love my gift - complete with certificate of authenticity. :D

The challenge was to come up with your own box trolls. I just went with the first thing that popped into my head... then the second... and a third one...

Ok! That should be enough to read for now. Lots of pictures, lots of typing... I'm sure there is stuff I'm forgetting but it serves me right for not staying on top of this blog. I promise I will be better... form new habits!

Time for pizza.
Talk to ya all soon!